Connecticut based MarkZero Prototypes LLC and Irish based Sea Power Limited have teamed up to take part in the US Department of Energy’s Wave to Water competition. The mission is to develop and deploy a working prototype of a small scale wave energy driven reverse osmosis system. The prototype will use a novel RO pumping system with energy recovery, and be powered fully by available wave energy acting on the WEC.

The MZSP Freshwater Production System is an easily deployable wave attenuator with an on-board reverse osmosis system. It is designed to be small and modular and deployable in emergency and disaster relief scenarios. It collects the freshwater in nearby flotation bags. Alternatively, the water can be hosed to a nearby vessel or back to shore.

A video of the concept can be seen here: https://www.youtube.com/watch?v=9hBxSqqANEQ

Both companies intend to commercialise the new product and make it available to NGOs, the military or to remote off-grid communities where there is a demand for freshwater produced by renewable energy means. A larger scale version of the system is also under development that could provide water to remote islands at a fraction of the cost of some existing operations. 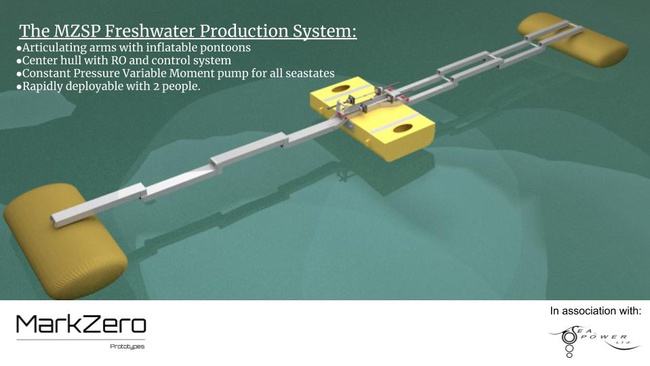