Sea Power Ltd., in partnership with such companies such as 4cEngineering, Romax, ARUP and DNV GL, Wood, Waveventure, and Exceedance, are continuously engaged in the development of the large scale Seapower Platform and PTO. In early 2014, numerical analyses pointed to even better power performance predictions in real seas after another round of shape and scale optimisation. The site dependent power matrix is constantly being updated and improvements made as further physical testing occurs. A detailed cost analysis on the Seapower Platform has yielded very interesting results.

A realistic near-term target is a Levelised Cost of Energy of lower than 15 cent per kWh for an array of units in a 100MW wave array. From physical testing* at 1:25 and 1:4 scale we find that the full scale Seapower Platform is ideal for the North Atlantic Belmullet AMETS type site as well other sites globally that have >60 kW/m annual average wave resources (shown in red regions below).  LCOE is lowest where this annual average resource is highest.  Potential target locations for the technology are shown below. As well as Europe, they include territories in USA, Canada, South America, South Africa, Australia and New Zealand:

A detailed Levelised Cost of Energy model has been carried out at full scale. Such a device would have an installed capacity of 1.0 MW, typically using two 500 kWe PTO modules per unit

Further optimisation and analyses in 2017-2018, using Wood analysis and Exceedance financial modelling, pointed to lower LCOE values. This indicates £156.1/MWh (15.6p/kWh) for a 100 unit Array is possible in the near term, using a device that is 131m long, 19.5m wide. A high monetary discount rate of 10% used in the analysis, which indicates lower levels of LCOE is possible. The most recent 2019 LCOE analysis now indicates levels of < £143.5 /MWh.  (14p/kWh) so this figure is constantly improving. 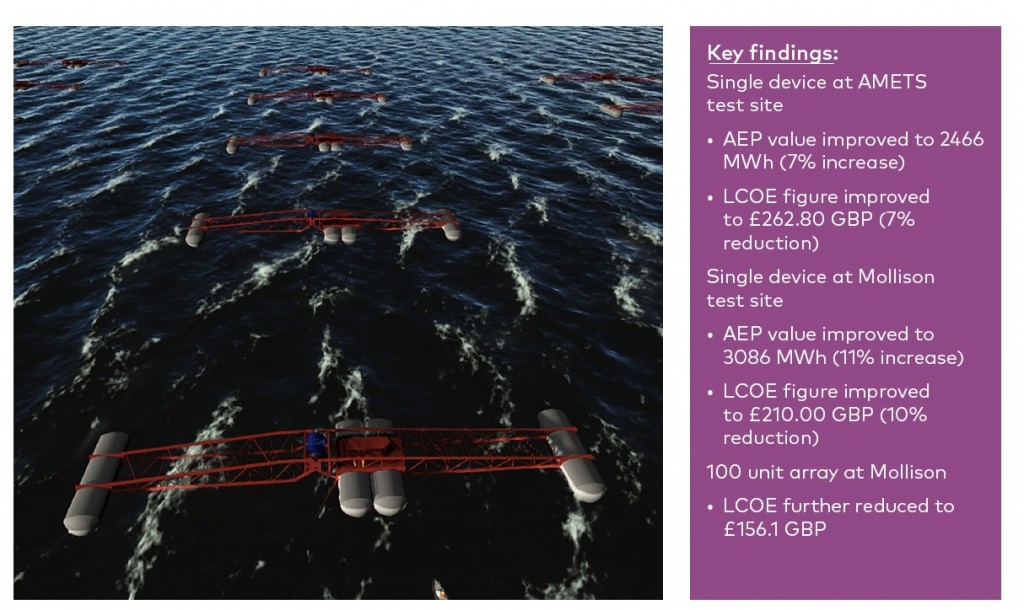 The total CAPEX for a single full scale machine is €4.68 million including PTO, structures, moorings, deployment. A conservative annual OPEX estimate for a single unit is €341,000. The energy harvested from a single unit of this scale is at least 2.41 GWh/year. This estimation allows for an annual power availability of 90%, and a conservative overall PTO efficiency of 75%. The annual income generated for a single machine is €625,000 assuming the current Irish Feed-in Tariff. Using a monetary discount rate as suggested by the UK Carbon Trust, this equates to a levelised cost of energy, depending on the size of the wave farm, between 15 and 20 cent per kWh and a payback period of less than 16 years. Estimates also show IRRs greater than 9.6% for a 100MW array.

The CAPEX, currently (low TRL) predicted at less than €4.7 million per MW per unit is made up of the following: 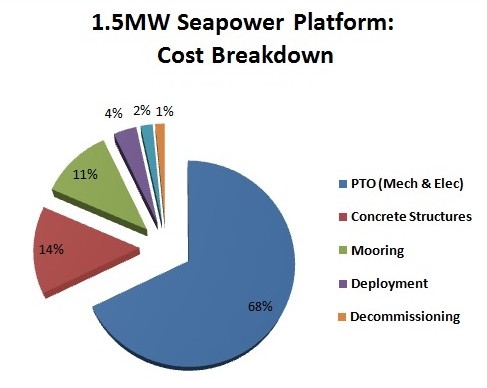 The analysis considered WEC quantities from 1 to 100, each suited to a typical 100m deep Belmullet AMETS test site off the west coast of Co. Mayo in Ireland. Validated power performing tank test data in irregular seas was matched to the publicly available wave height and wave period data for the Belmullet site and conservative costs were obtained. Operating costs were based on actual historic data from previous experience with up to 4 recent large scale WEC maintenance, launch and decommissioning operations, as well as knowledge of the good accessibility times for maintenance on such a platform during the year. More than 250 variables go to make up the inputs for CAPEX and OPEX estimates. All these cost estimates including moorings, concrete hull manufacturing, steel works, and a 1MW capacity PTO were based on conservative estimates and quotations from large suppliers.

The efforts of the engineers to make a commercially viable product at utility scale means that we are ready to produce a smaller scale standalone product that can be used to deliver freshwater to local communities now.

*Visit our Gallery page and our YouTube Channel to see informative photos and clips of the Seapower Platform’s physical testing, including testing of sub-systems